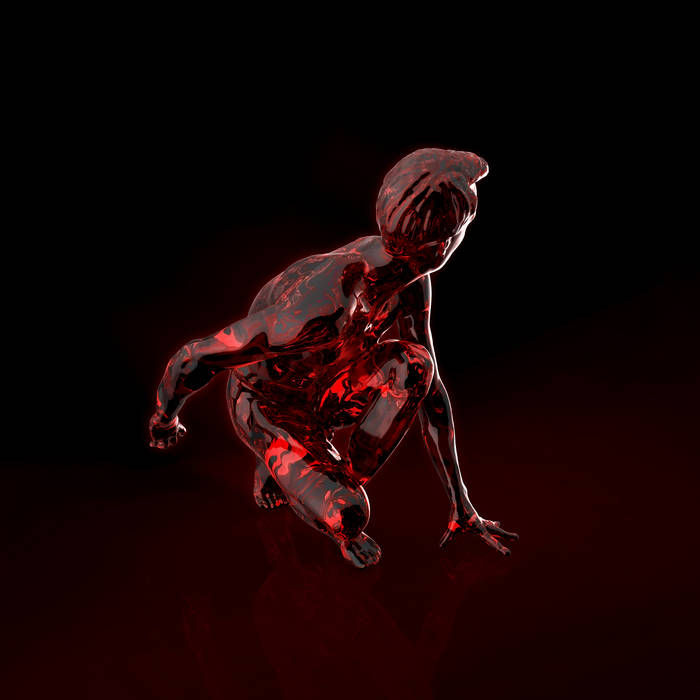 In French, "l’appel du vide" connotes the siren song beckoning you to throw yourself into the void, down the abyss – simply because there is no worse idea. But what if what’s calling to you so irresistibly is not nothingness but abundance? It is, indeed, the ever-present backdrop to our lives: information both redundant and relevant, breaking news, fake news, late capitalist memes, cat content, dystopian tech documentaries, iconic music clips, the White House live stream, endless playlists, sponsored stories, unanswered emails, selfies taken before getting up and then after, of expanding algorithms and monologues. And all of it only serves to ask one question: are you listening?

Having grown up with and on the internet, Martin Steer (1986) has transformed its pull into a concept album that is just as immediate and intangible as the digital world. Bad Stream is guitars and machines vanishing in the spaces between Radiohead, Notwist and Nine Inch Nails only to reemerge amidst ambient, noise, and drone. It marks Martin’s attempt to release his own history, alienation and loneliness into the chaos of the digital world and to retain their substance in doing so. Needless to say, he will have to fail in order to succeed. Bad Stream, then, is his modus operandi – a soundtrack to the feelings of resignation, isolation, and cynicism within the neoliberal cyberspace and to that strangely numbing comfort of bodies transmuting into zeros and ones in real time.

“I look at my phone even while I’m playing guitar,” says Martin Steer, “and that isn’t even entirely voluntary. The 2010s really changed my perception of how digital technologies and social media affect me as a musician. Through Bad Stream I want to make sense of this particular kind of anxiety, and to use sensory overstimulation as a way to develop an independent and progressive musical language.”

Martin has spent half his life writing hybrid songs; in doing so, he transcends the demarcation lines between rock and electronica, the pre-internet era and our world today, drawing on and transforming his experiences. In Bad Stream, everything coalesces. The past seven years took Martin and his laptop and guitar from Berlin to Mexico and Nepal and, as a founding member of Frittenbude, into the German charts and to various festival stages. And yet, Bad Stream is a true “Berlin album” out of Friedrichshain, Neukölln, and Kreuzberg, one that was recorded in a studio on the outskirts of Munich with real drums by Spur and programmed beats, with shoegaze guitars, piano, smartphone synths, violins and field recordings found on the darknet.

It’s not the first time Martin does “his own thing”: after Pandoras.Box, he founded ANTIME in 2011 as a label and DIY-network for electronic music with more than 20 releases and dozens of label nights to its name. Here as much as anywhere in Martin’s work, opposites attract, transitions blur, and inspiration proliferates.

He has read books upon books, copied citations out from the internet, logged his own digital life and turned it into a psychogram. “The five-year process of creating this album was a little like archeology,” he says. “I spent so long looking for some kind of balance. I was constantly in between going forward too fast or pausing to think, between boredom and panic.” That’s why Bad Stream works as a name. What holds it all together is this experimental guitar sound, the analogue Tempest drum synth and his voice, whose hopeless timbre conveys reflections on technology, systems, the future, drugs, people, and his own place.

Bad Stream is an album about what it means to dive into bot likes and unfollows, to drown in the data garbage and the broken links so ubiquitous in the Capitalocene, and to come back to the surface with your battery running on empty and unable to tell what was a dream and whether we haven’t long relinquished control. “The Internet has lost its innocence,” says Martin, before going back in head first. “These days I try not to waste too much time on it.”

The twelve songs of his debut album – titled Already Dark, Sex Cries, Megafauna and Nervous Love, for example – encompass complex layers and metaphormic arrangements. Just like the artistic music videos accompanying them, they speak of man’s profound alienation amid his omnipresent screens.

The first single is the album’s central piece: Already Dark is distinctly post-industrial in composition, commenting in its seven minutes on our accelerating world of face recognition, big data, species extinction, mind hacks and human uploads. It is a psycho collage about a world, where everything seems to be overheated, simulated and programmed - digital capitalism, polar icecaps, hypertransparent individuals dazed by systems and total alienation by artificial intelligence. Already Dark an anti-utopian hymn for a posthuman transition into digital slavery. The mechanical beat pulsates and marches, acoustic and synthetic sounds melt into each other and shape this powerful but vulnerable construct which swells and swells - just till everything implodes in the peaks of a (post)brutal noise nirvana. In it´s eclectic and transformative artistic language Already Dark orchestrates the key-coordinates of Bad Streams vision of future-facing songwriting and progressive sound design.

Martin Steer isn’t alone in this. He has friends who share his thoughts and sentiments, who feature on the album and who speak many languages, who scanned him for the album’s 3D artwork and who programmed complex music videos and software for his live shows. They make sure that no one escapes this bad stream, keeping the project forever going forward, never at a standstill. “I want it to be like the internet – drawing people in and not letting them out,” says Martin. Communication has been interrupted, but it is still all that we have.
There is a pull, a draw, and it says: are you listening?