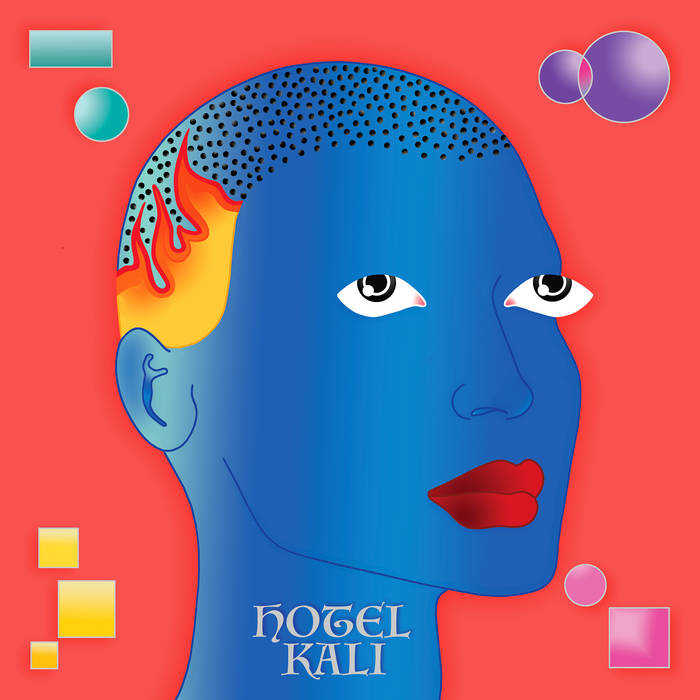 Hotel Kali isn’t a place but a story; one collectively told by four people who first happened to be in the right place at exactly the right time and then managed to transcend both space and time through their music. The German-Indian band’s self-titled debut album was not designed on a drawing board but rather came to life in spontaneous jam sessions, driven by a desire to integrate four distinct voices into one narrative and marked by all the happy accidents that took place along the way. “Hotel Kali” is a living, breathing entity that theoretically picks up on many different musical traditions but in practice challenges them all. English and Bengali, motorik grooves and intricate guitar lines, pop sentiments and exploratory iconoclasm come together, dance around each other, and over the course of seven songs find a common ground somewhere between and far beyond cosmic rock, experimental dance music, and adventurous post-rock.

The story of Hotel Kali began in November 2018, when the Berlin-based musician Theresa Stroetges — also known as a solo artist under the name Golden Diskó Ship and member of the three-piece Soft Grid — came to Kolkata for a two-month artist residency organised by the Goethe-Institut and Musicboard Berlin in collaboration with the Border Movement initiative. Wanting to collaborate with local musicians rather than working in isolation, she reached out to Varun Desai for recommendations. Once the promoter, synth nerd and solo artist, who is active under the monikers 5volts and Varundo, had sent her some of his own pieces, he was the first to come on board. Soon thereafter, Stroetges and Desai were joined by the versatile double bass player and seasoned session musician Debjit Mahalanobis and the songwriter and storyteller Suyasha Sengupta a.k.a. Plastic Parvati, a former member of The Ganesh Talkies.

Before the newly-formed band checked into Hotel Kali, they first got together at the local Goethe-Institut in order to test the waters during prolonged jam sessions. “We were like kids in a candy store,” says Sengupta. “There was complete chaos and our energies were all over the place.” Stroetges recounts that the beginning of their collaboration was marked by a sort of reversed cultural rapprochement: Desai came around with some krautrock-inspired melodies and rhythms on his array of analogue hardware, Stroetges played some vaguely Indian sounding guitar lines. Laughter ensued before things became serious very quickly. “Gradually, all four sounds combined into one cohesive unit and we began to write music almost manically,” remembers Sengupta. Hotel Kali — the name is a tongue-in-cheek reference to the song that virtually every Kolkata sound technician plays during soundcheck, but also a tribute to the Hindu goddess reinterpreted by Opashona Ghosh for the album’s artwork — was built that moment and continued to grow in the following days.

Soon, the quartet had written an album’s worth of songs. After rehearsing the material in a farmhouse outside of the town and then performing it live in Kolkata, they were approached by the then-director of Goethe-Institut, Friso Maecker, who offered to support the project beyond their one-off performance as the Border Movement residency band. Thus, less than a year later, Stroetges returned to Kolkata and the four-piece entered the city’s BlooperHouse Studios. “We consciously decided that we didn't want to make something too highly produced that we would not be able to replay completely live,” says Desai about the recording sessions, during which they also spontaneously wrote the two new songs “Disco Shobar” and “Buntes Schwarz” to complement their repertoire, which also includes a cover version of Stroetges’s Golden Diskó Ship song “Fake Horse,” a particular favourite of Mahalanobis.

Perhaps it’s this new rendition of a track originally released in 2014 that best exemplifies how Hotel Kali works. The meditative, anthemic character of the original gives way to the jittery IDM beats provided in tandem by Sengupta and Desai that are punctuated by a wonky bassline played on Mahalanobis’s double bass, before the guitar, analogue synths and Stroetges and Sengupta’s voices enter the mix and thus a polyphonic dialogue with each other. It’s the sound of four people agreeing upon a starting point before venturing into the unknown and making it up as they go along. “One can find little pieces of all our personalities combined. We started out as strangers and now we’re connected through a collective experience,” comments Sengupta on their songwriting process and the trajectory of the entire project.

This also extends to the lyrics, which throughout the album alternate between English and Bengali — something that was not done on purpose, as Sengupta explains. “It’s the way most of us speak here, often mixing our languages.” This however does not mean that there isn’t a certain political dimension to Hotel Kali’s music. “It’s not meant to be a protest, but rather a celebration of identities and the freshness of our individuality and similarities combined,” elaborates the musician. One example for this approach is “Disco Shobar” (“Disco Is for Everyone”), a bassline-driven mid-tempo track that gradually becomes more intense and tangible as it progresses. “It talks of how disco does not discriminate — it’s for you, it’s for me, it’s for everybody,” according to Sengupta. “In an increasingly polarising world, we need to highlight that, as clichéd as it may sound, music brings people together. While our differences make us unique, it is our similarities that make us truly human.”

This then, is also the essence of both Hotel Kali as a musical project and “Hotel Kali,” the album: four different individuals becoming one ever-different entity; four voices narrating a story that is full of twists and turns but has no fixed ending.